Yes, I'm a photographer and this is a photo blog, but I'm going to take a few minutes to share the rare editorial with my readers (viewers).

Biting the hand that feeds you is poor judgement in just about any context, and I've therefore remained silent on the topic of Willie Taggart. But now that my feeding hand has fed Taggart 16M or 17M to hit the door, I think I can open up a bit.

In his parting tweet, Taggart said, "Building a program and culture takes time, and I regret that we will not have the opportunity to continue to coach these incredible young men."  I'd argue that Taggart's work in building a culture at FSU football was fully mature from day one. But rather than pen a thousand words, let me sum up my view with a single photo... warm-ups from Taggart's last game at FSU: 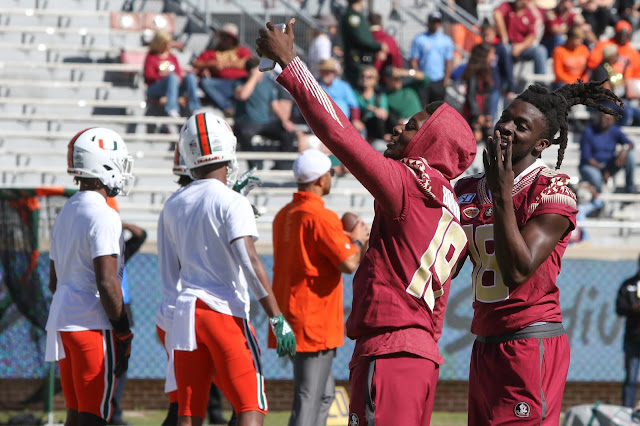 Do you see anything wrong with this scene?  Apparently Taggart didn't, but I sure do.  Kirk Herbstreet railed against the lack of discipline in Taggart's program, but lack of discipline was merely the outwardly visible symptom of a internalized cancerous culture.  From the top down, the culture that Taggart promoted was narcissistic, elitest (in a bad way), and apathetic.

Shooting the first game in the Taggart era, the change was like a steamroller.  The players didn't dress out for warm-ups.  No uniforms, no helmets, no pads... just shorts and tees.  We (media) all just wrote it off as, "it's hot... they're saving themselves for the game."   Nope... the pic above is the last game of the Taggart era, and every game in between looked just like it.

Warm-ups consisted primarily of dancing to the rap blasted from the stadium's PA (how appropriate that Plies got to see Taggart off Saturday) and posing idiotically for the exclusive Taggart-hired paparazzi, or for selfies on their own cell phones.  Can you imagine such a thing?   Players... tucking cell phones into their football pants just long enough to catch the ball and then whipping them back out for another selfie!  Absolutely... Unbelievable!

Herbstreet is fond of the saying, "If you lose don't say much, and if you win say even less."  Here's the Taggart culture look, postgame Clemson 2018, a game in which FSU was embarrassed 59-10... 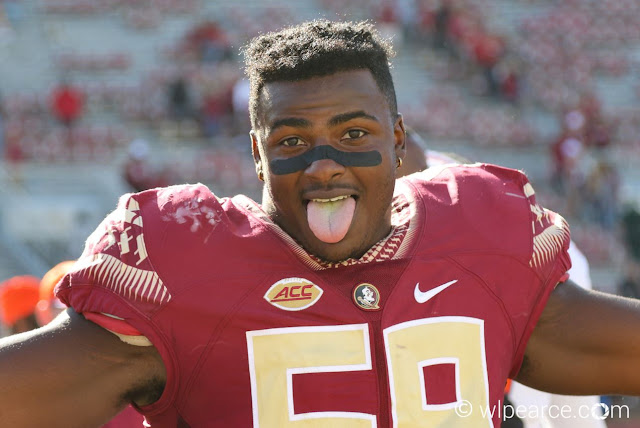 So much for Jim McKay's "agony of defeat" that I grew up hearing every weekend.  If that's your attitude after such a humiliating home turf loss, what do you think the next week looks like?  A similarly humiliating 28-47 loss to a lessor NC State team... that's what!

The narcissism was on full display week after week with the cringe worthy celebrations.  When you're down by 25 points in the fourth quarter, you don't hop around like a mindless fool, flexing your muscles and chest bumping teammates... after a sack.  How we didn't make the "C'mon Man" segment every week, I'll never know.  Forest for the trees, guys... forest for the trees.

I can only hope that Coach Haggins undoes some of the damage done.  If anyone can, it would be him.  Odell is a classy guy.  But it will be a long uphill battle.  Once a Taggart culture takes hold, it's hard to undo without new blood and a new outlook.  Let's hope our next coach can recruit a little character into the team along with talent.