Part two of a three part series on our favorite pics from the 2014 football season.  Part one left off with the Wake Forest game, so we pick up here with the Syracuse game.

What a great week!  We headed up to Niagara and made a week out of it and capped it all off with the Syracuse game in the Carrier Dome (which, by the way, is not air conditioned... what's up with that Carrier?).  Can we sneak a Niagara photo in here?  If you're more interested in Niagara than football, you can see more in the Niagara Falls Gallery. 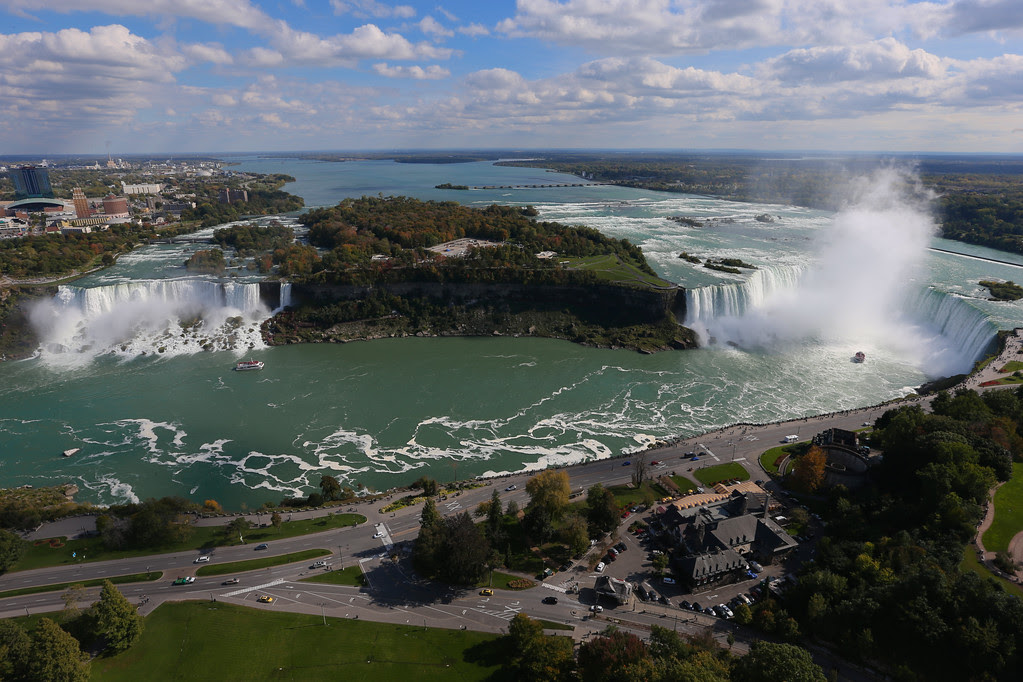 The game yielded some good pics too.  Jameis Winston and Rashad Greene connected for some impressive passing yardage.  Here's Rashad Greene fighting for a touchdown after the catch.  Rashad had a nice game at Syracuse. 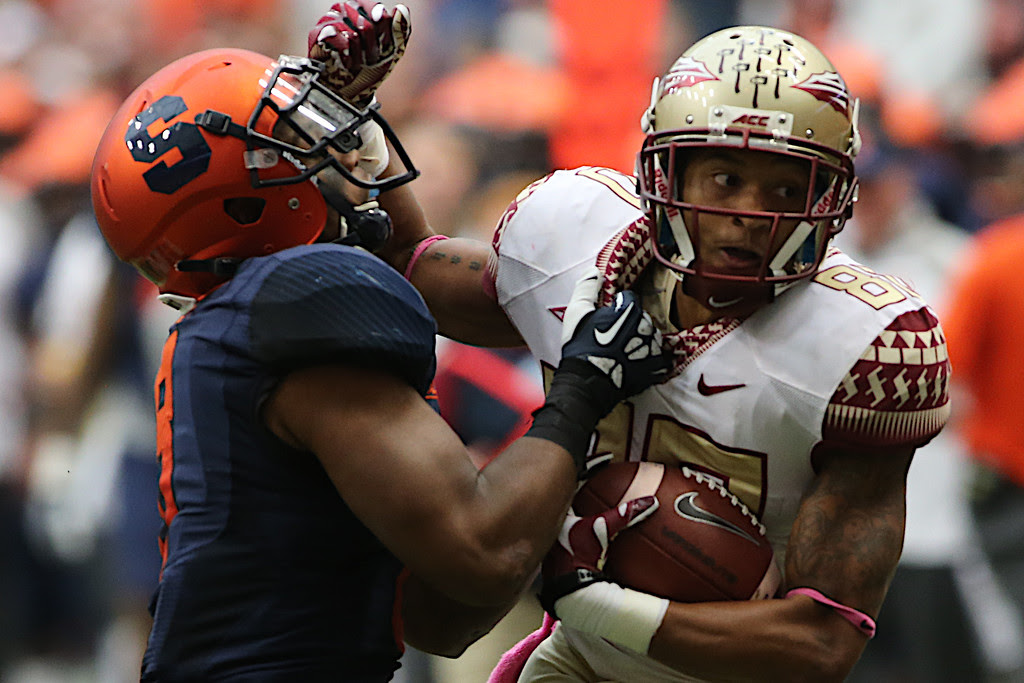 And Jameis on the throwing end of the equation. 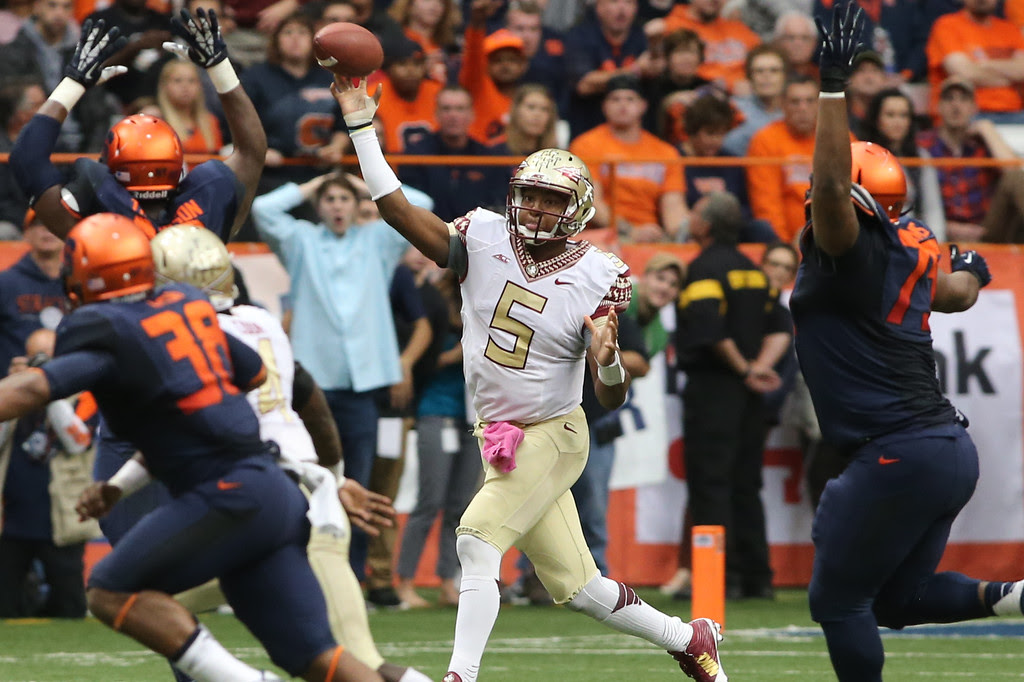 The Syracuse game saw the emergence of true freshman Dalvin Cook, who would become a true force later in the season with senior Karlos Williams sidelined by injury. 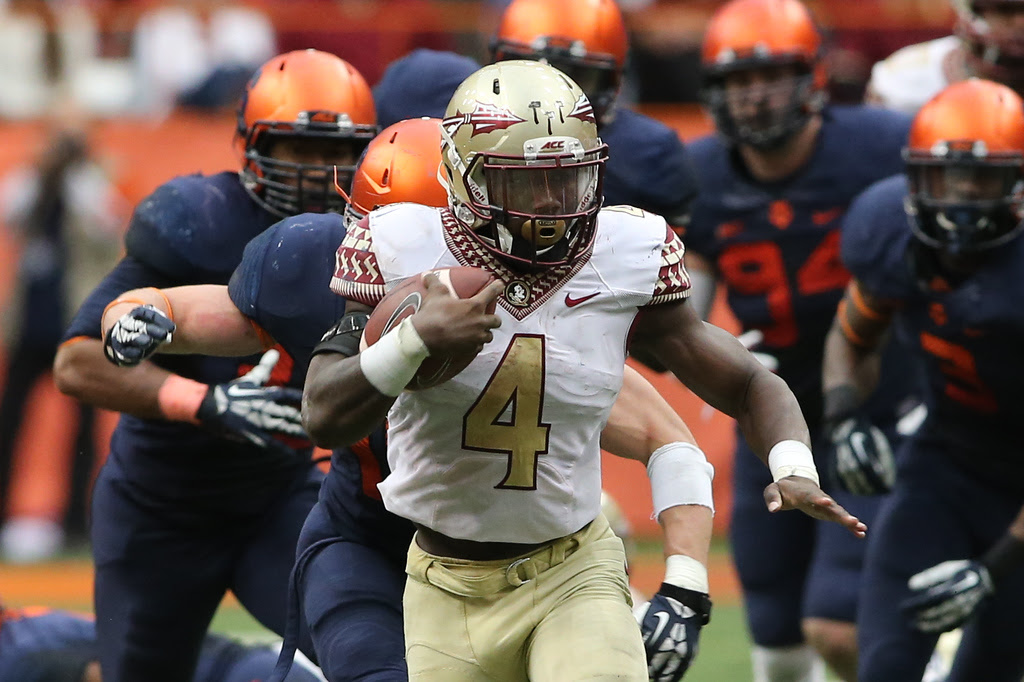 And we can't leave the Syracuse game without giving a shout-out to the Orange Man... one of the strangest mascots in college if you think about it.  He's a round orange dot.  But he's good at what he does. 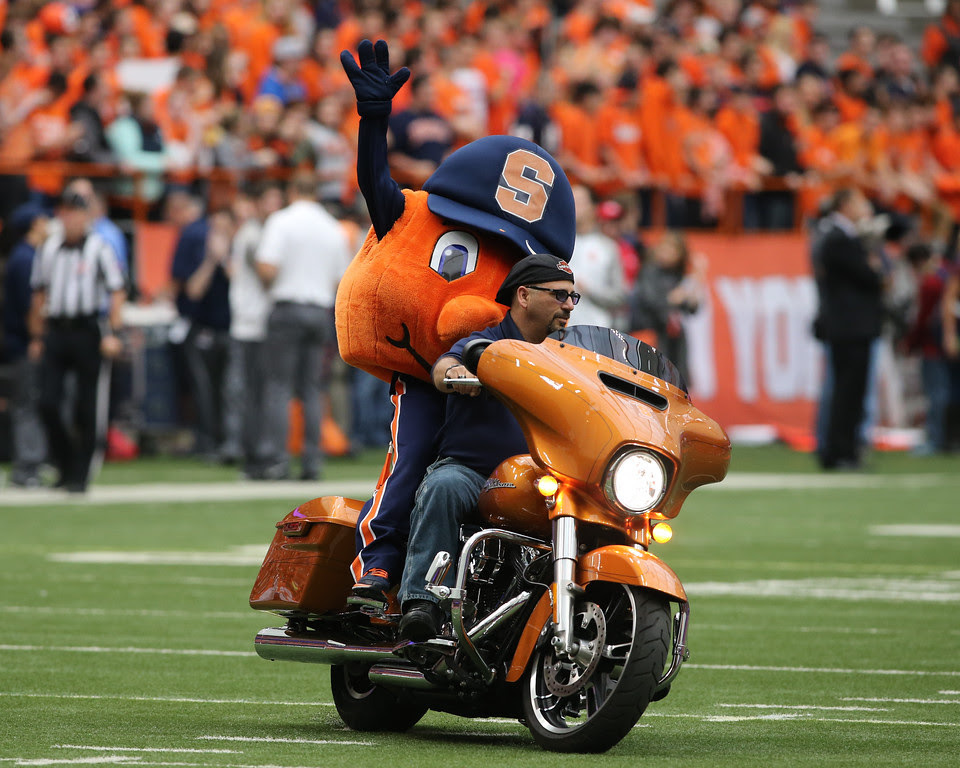 The midpoint of the season saw the long awaited match-up of FSU and Notre Dame, who last faced each other in 1993.  And those looking forward to a good game certainly were not disappointed!  The game also served as the third occasion for ESPN College Gameday to visit an FSU game for the season.  This allowed your intrepid wlpearce.com photographers a little behind the scenes look at the GameDay set. 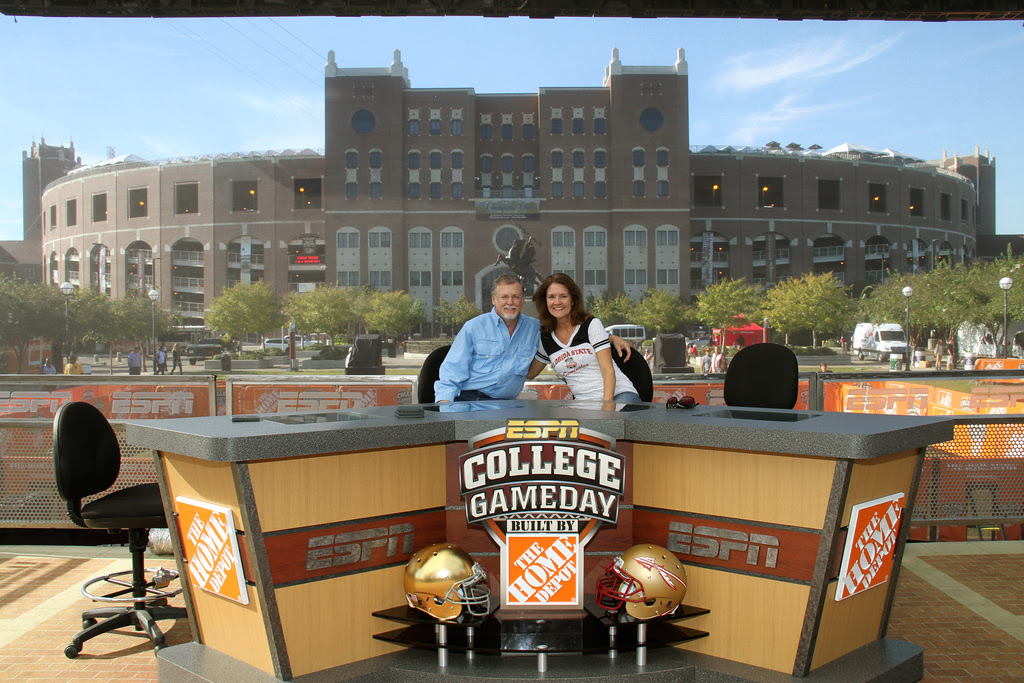 The Irish came in looking pretty intimidating... at least we were intimidated.  We felt like we might get pounded after sneaking this portrait during warm-ups. 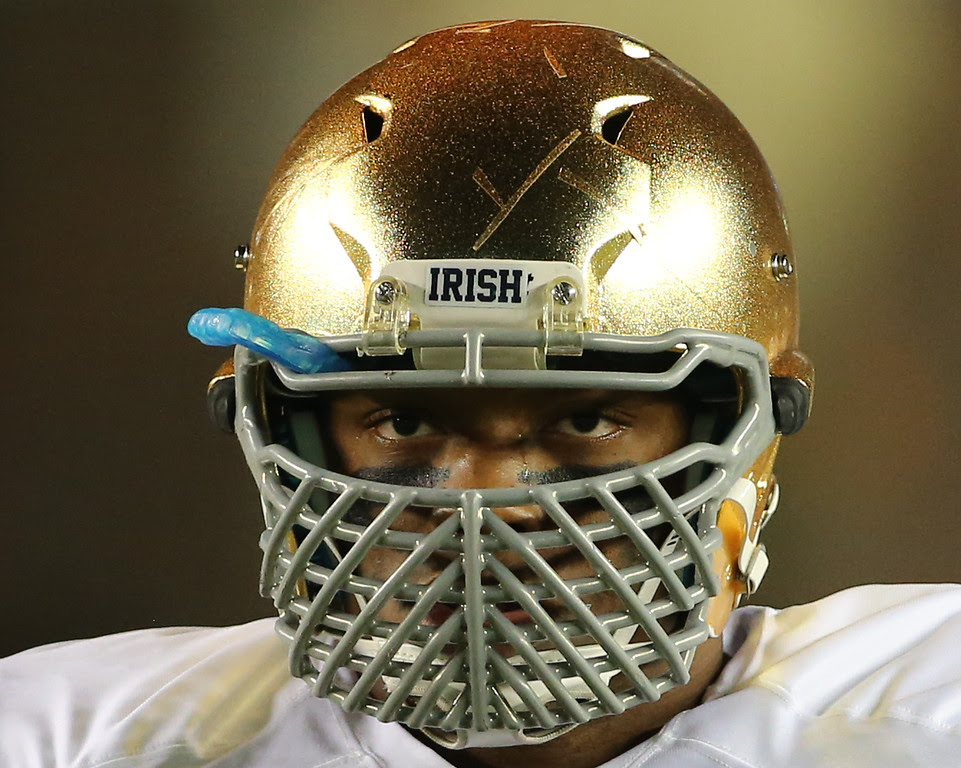 The game was a hard-hitting defensive struggle. 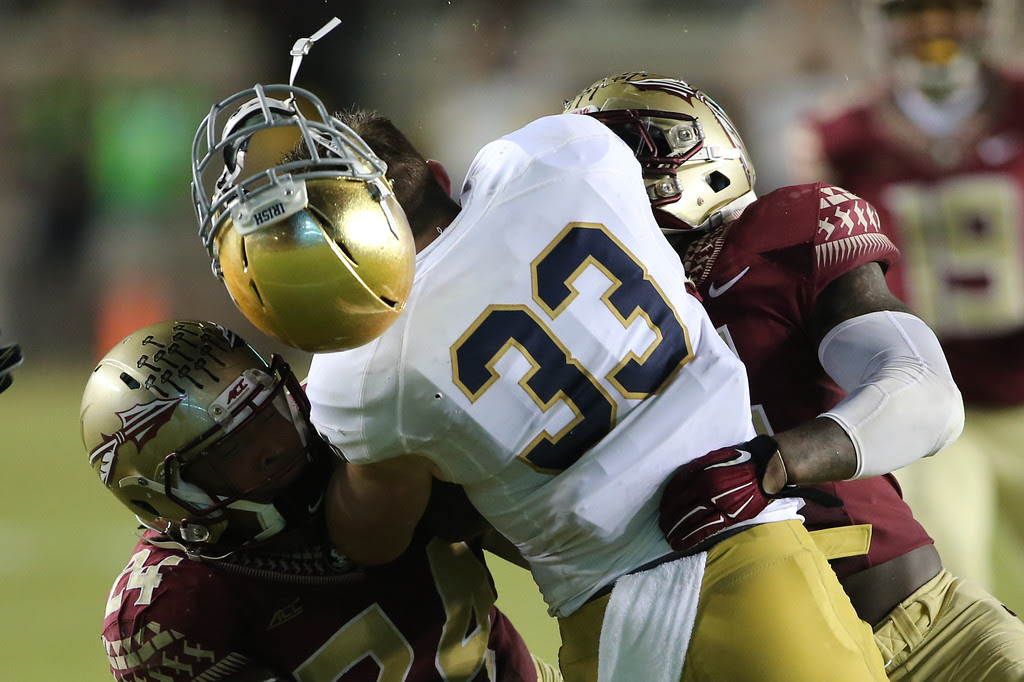 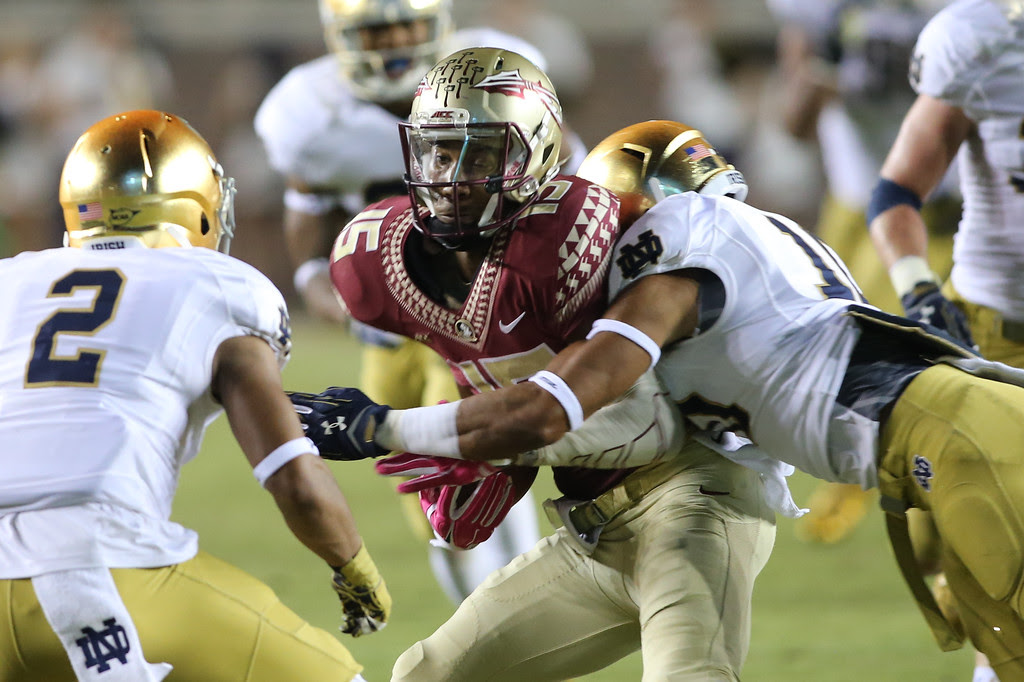 On the final drive, Notre Dame completed this pass to put them two yards from the end-zone and what seemed like a sure comeback victory.  On the next play, they completed a touchdown pass and the air whooshed out of the stadium like a knifed tire.  BUT... the refs called offensive pass interference on the rub route, and on the replay, it looked pretty obvious.  With one opportunity left, Notre Dame threw an interception in the end-zone to end the comeback threat.  So much for the luck of the Irish. 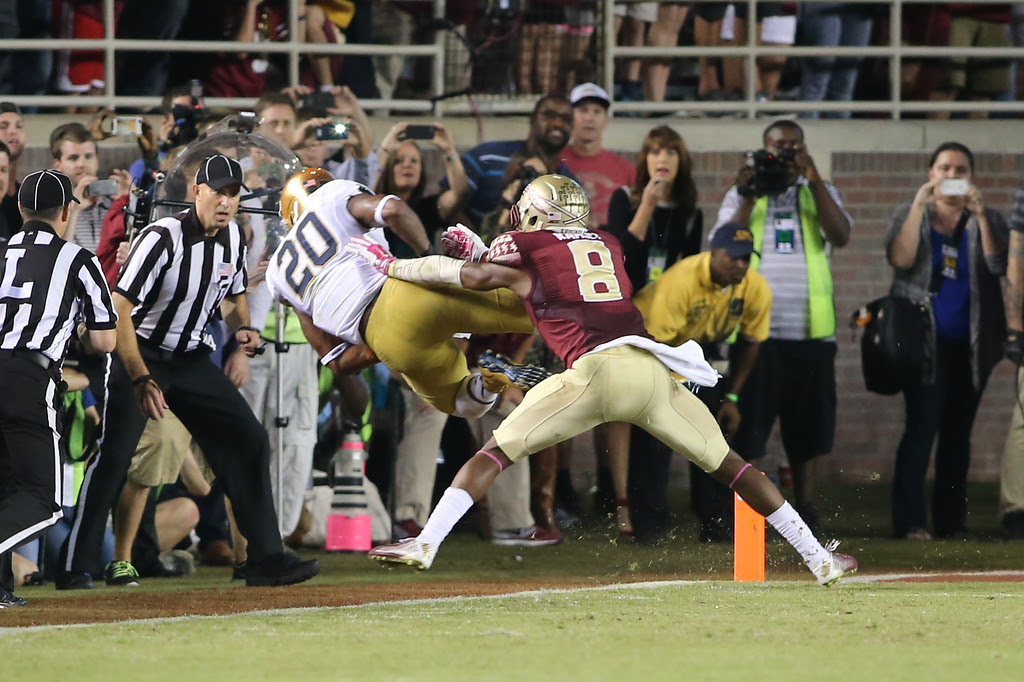 We missed the Louisville game... the Thursday night slot not being compatible with our travel schedule.  So, next up was Virginia.  This game was a good defensive effort for FSU, which kept them in the game while the offense sputtered to a slow start.  Here's Derrick Mitchell showing the ref what he found on the ground... with the wrong logo on it. 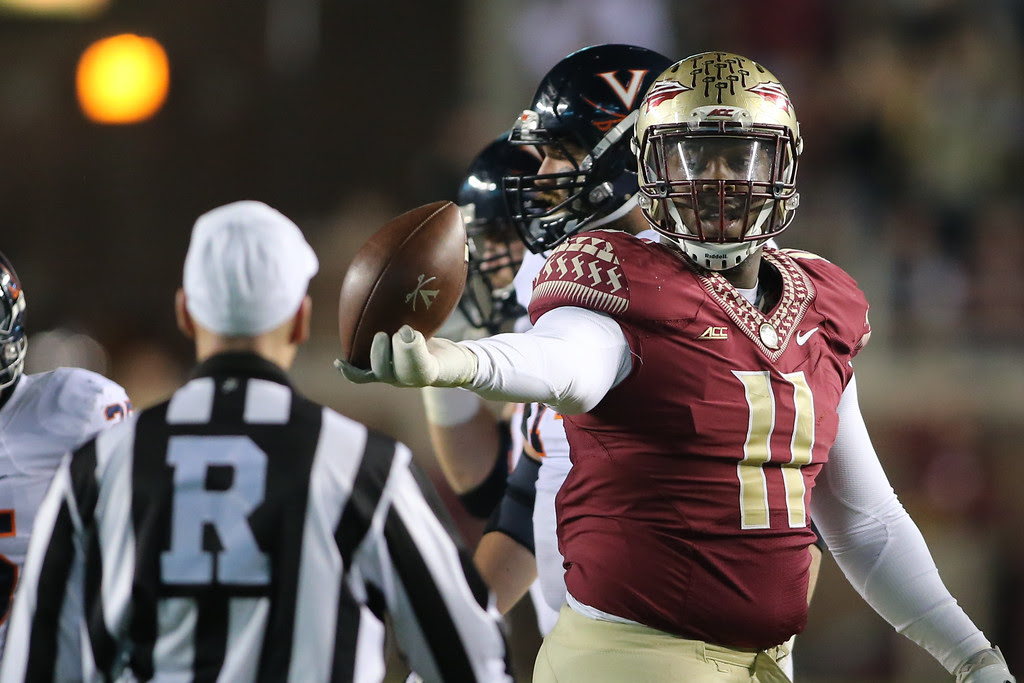 And you gotta love it when the big man gets the ball and rumbles into the end-zone.  Here's defensive lineman Eddie Goldman on his way after collecting an errant lateral.  Unfortunately, the play was called back as the turnover was ruled not advancable. 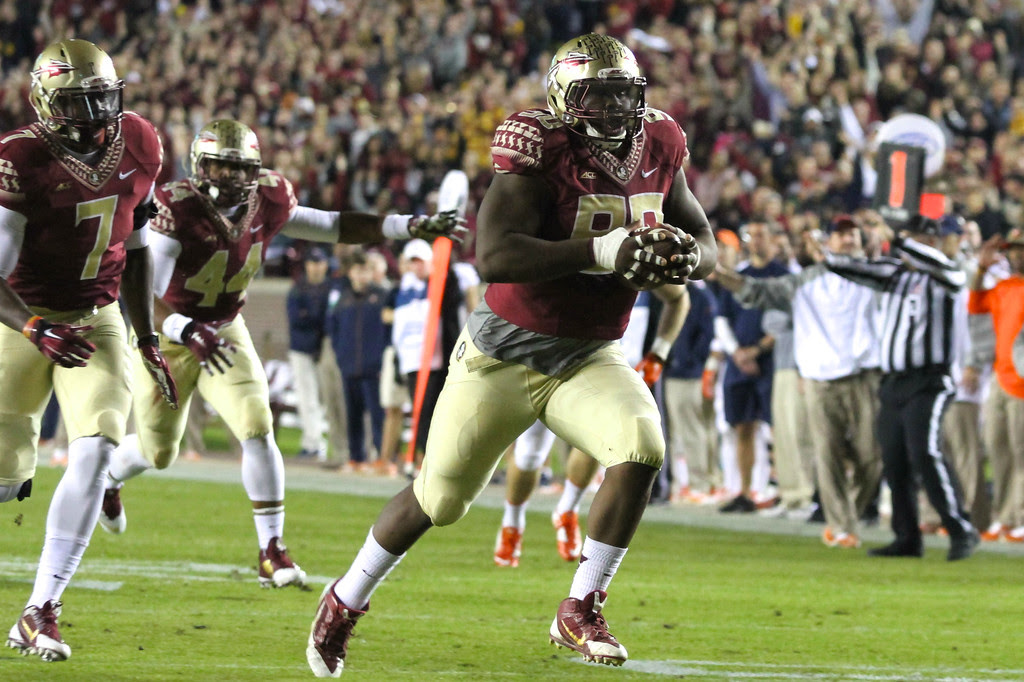 The Glitter Guys and Renegade were caught up in the spirit of the game.  I wonder how many trips to the eye doctor these guys make each season? 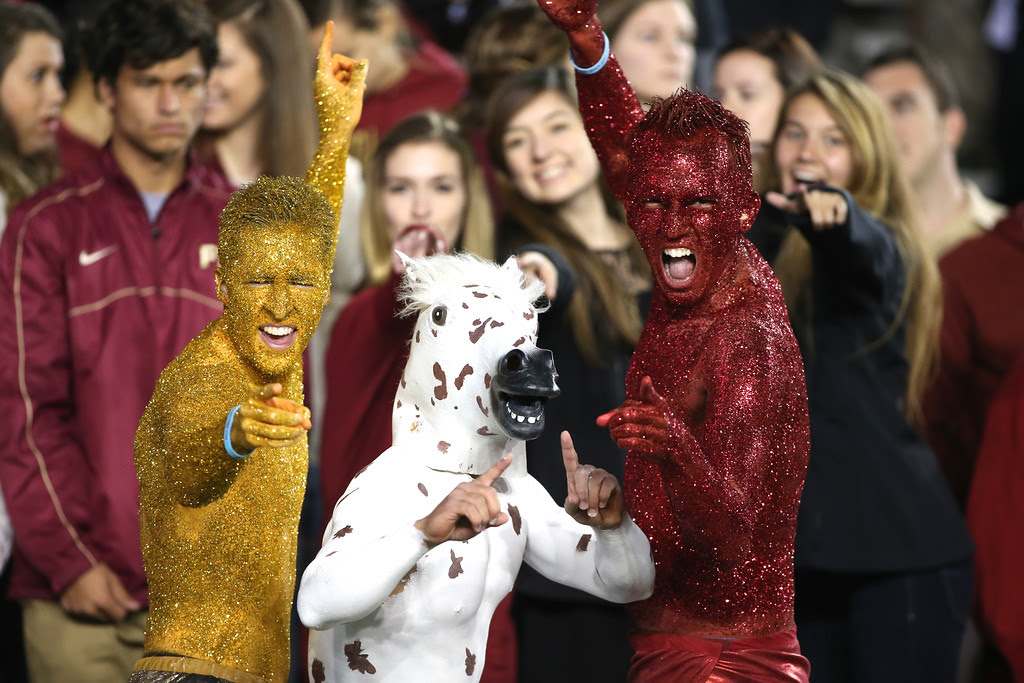 The fierce in-state rivalry with Miami took place at Sun Life Stadium this year and it was a close one!  Fortunately, no wide right this year (not that it would ever happen with Roberto Aquayo kicking).  With senior Karlos Williams out due to injury, true freshman Dalvin Cook picked up the slack as he would for the remainder of the year. 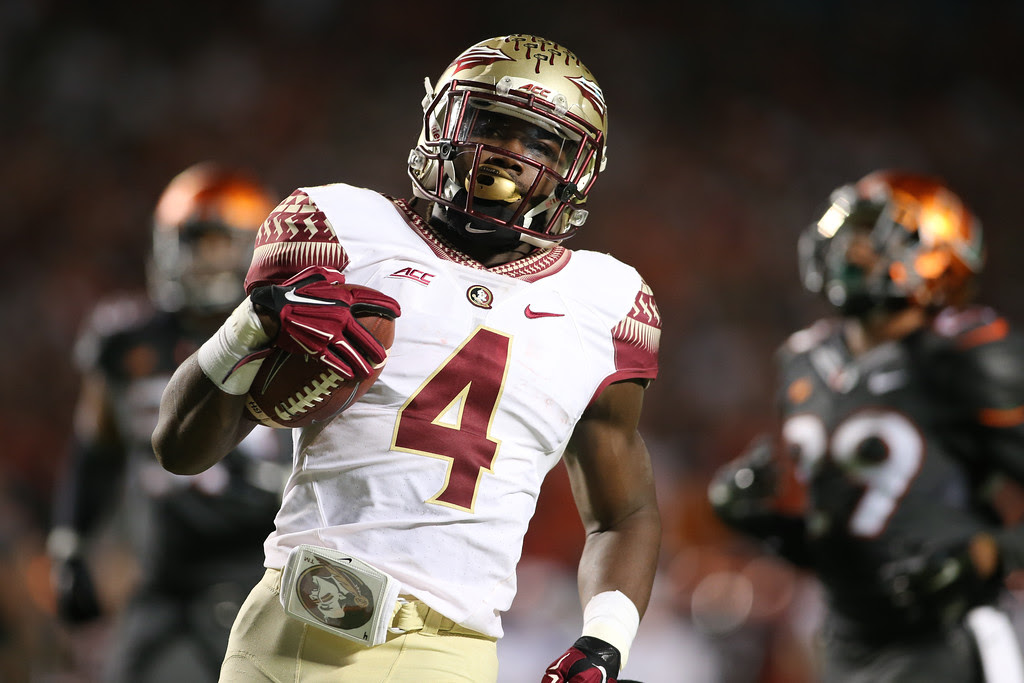 Travis Rudolph also started coming into his own at Miami and would be a factor the rest of the season. 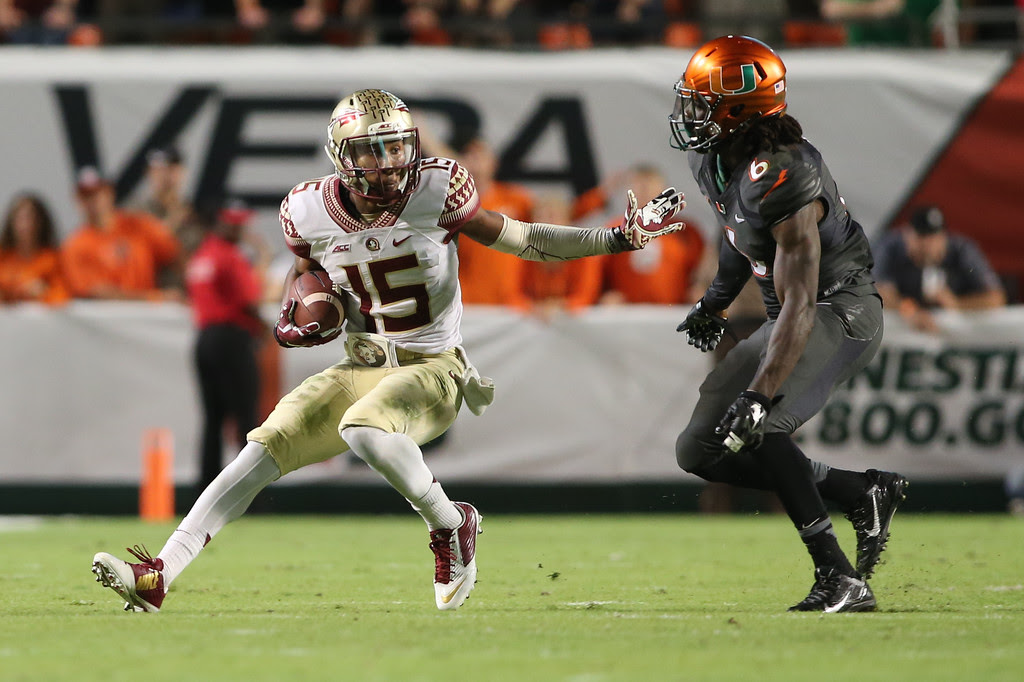 Once again, Eddie Goldman made his presence known in the backfield, contributing to a defensive effort that held Miami to three less points than FSU's offense managed to muster. 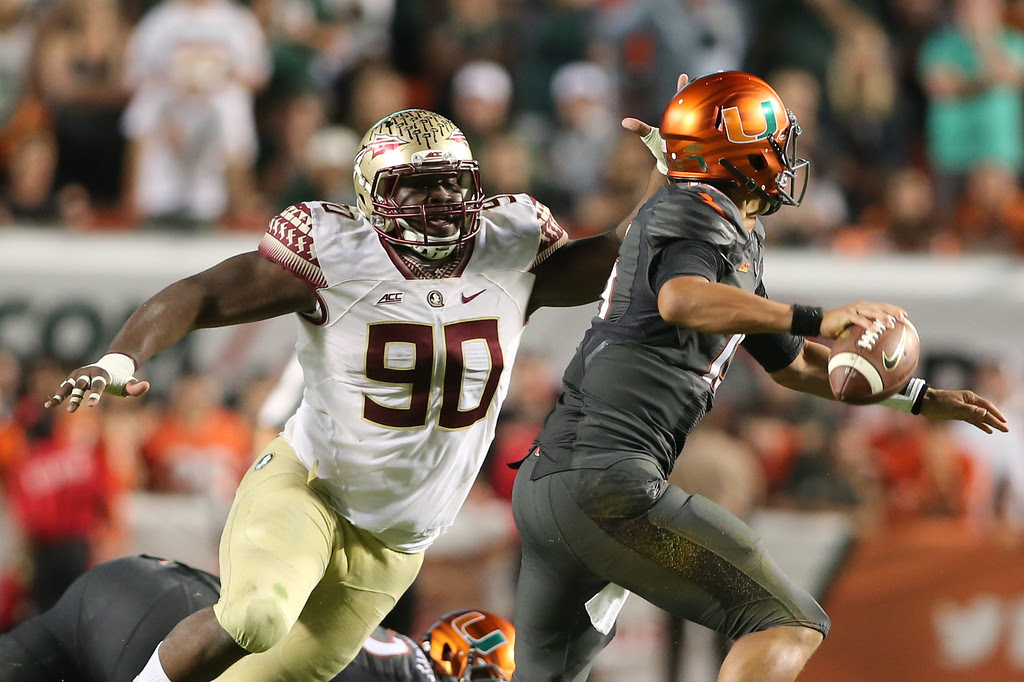 The Miami defense put a lot of pressure on Jameis Winston, forcing him from the pocket on several occasions, into scrambles for his life.  Jameis is an athlete though... he is rarely sacked, more often scrambling for positive yardage. 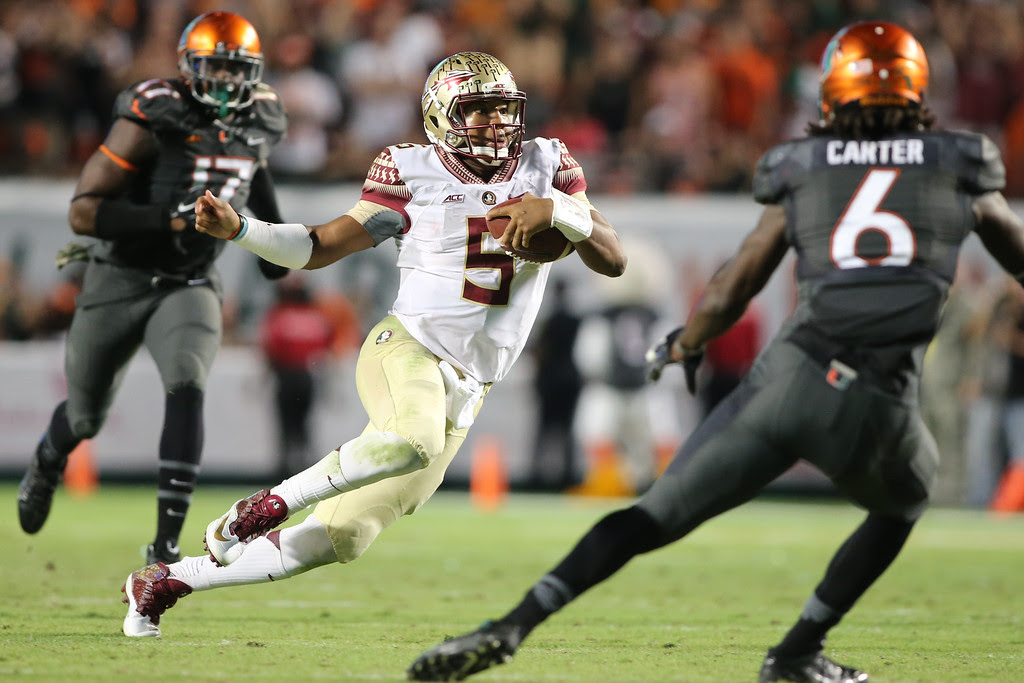 Watch for the final installment of this three part series coming soon.

See more football (and lots of other things) at wlpearce.com.
Posted by WLPearce at 2:52 PM