Just back from Penn Relays... Wow!  The Grand Prix of track meets did not fail to deliver, even in an off-Olympic year.  Yes, there were fewer world class athletes, and fewer world class relay teams, but to be expected in an off year.  The atmosphere was still the usual festive Penn Relays, and certainly the crowds didn't stay away... 100K+ over three days for the eleventh year in a row!

The highlight of the meet is always the USA vs. The World events.  The climax event is the 4x400 near the end of the day Saturday.  And talk about climaxes!  This was the wildest 4x400 I've seen at any level above AAU.

The teams participating were, of course, the USA team anchored by 4x400M 2012 Olympic silver medalist Manteo Mitchell... the 2012 London gold medal Bahamian team, all four still together... Brazil, anchored by South American Games silver medalist Hugo De Sousa... the always dangerous Jamaicans with some pretty fresh athletes on the world stage... and the team from Nigeria, anchored by African Games gold medalist in both 400M and 4x400M, Amaechi Morton.

Now, on to the pictures (that's what you really wanted to see anyway, right?)

Even with the USA in the race, I was keying on the Bahamians, because I just like the Bahamians.  I see them frequently at track meets in my home state of Florida, and maybe I just like the way they say, "Hey Mon!"  Two time Olympic medalist Michael Mathieu kicked off the race for the Bahamians with a 1/10th of a second leading 45.7 400M, here passing off to Demetrius Pinder at the end of the first leg... 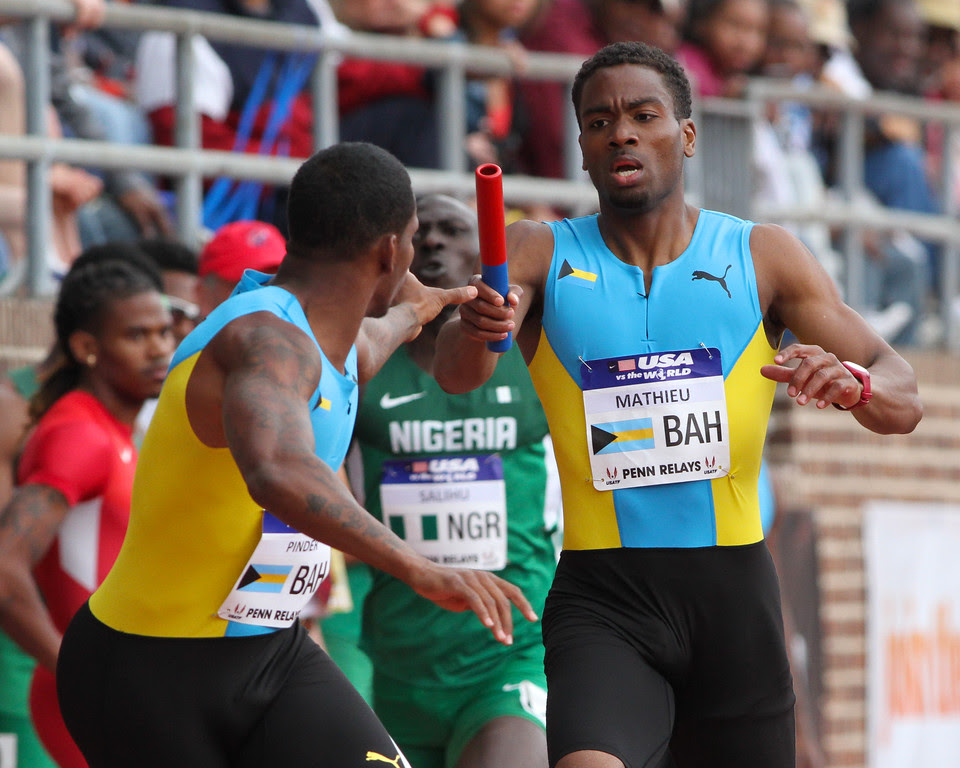 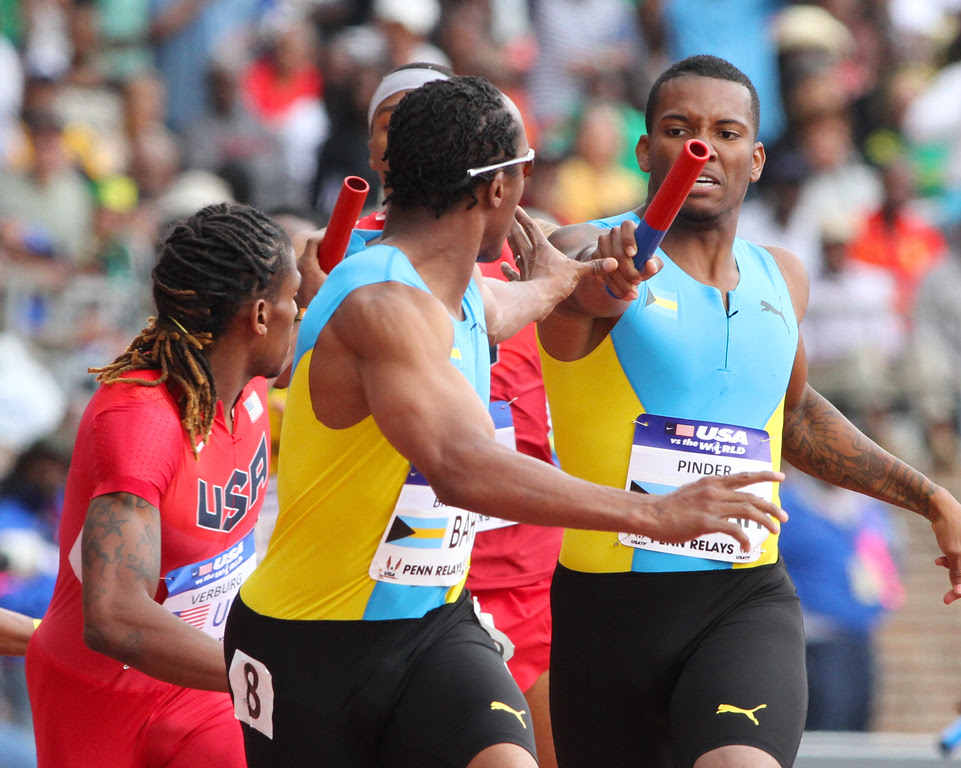 Chris Brown starts the third leg with American David Verburg, member of the 4x400 gold medal USA team at the 2013 World Championships, nipping at his heels... 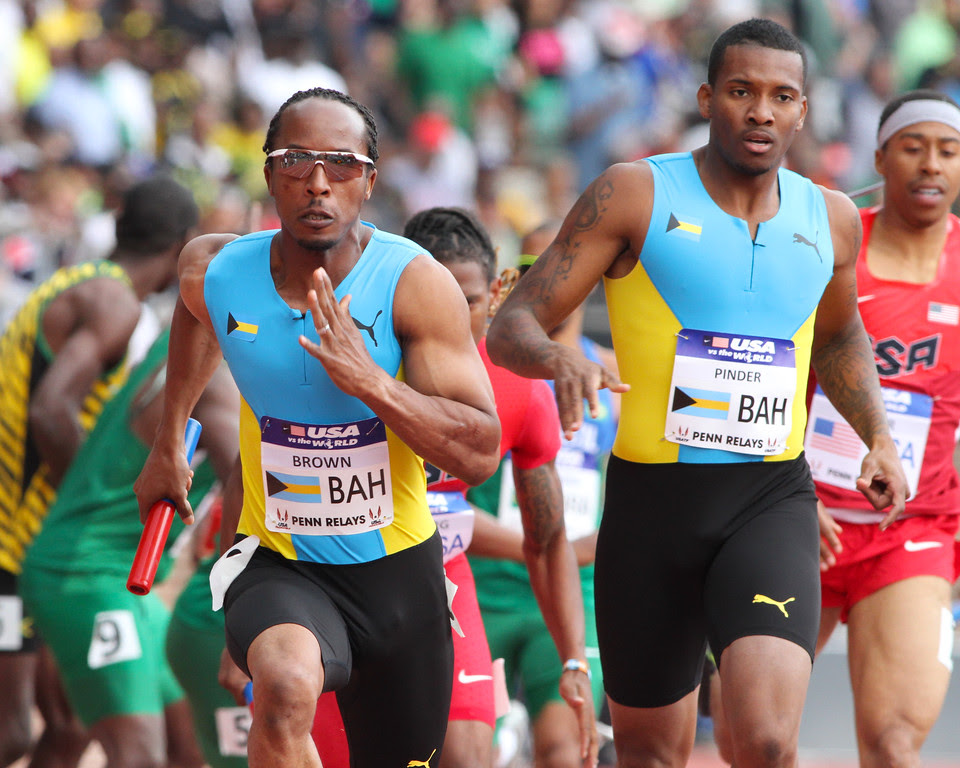 Brown cranked out a blistering 45.10 400M, but American Verburg made up the difference with a red hot 44.50 400M which put the two of them running head to head coming into the last transition.  Here's where it got bizarre.  The Race Marshal watched the two of them coming out of turn four and late in the leg, switched the USA handoff position to the inside of the track because it appeared that Verburg had taken the lead.  Problem is, that's not the way the two of them came down the final stretch.  Something bad is going to happen here!... 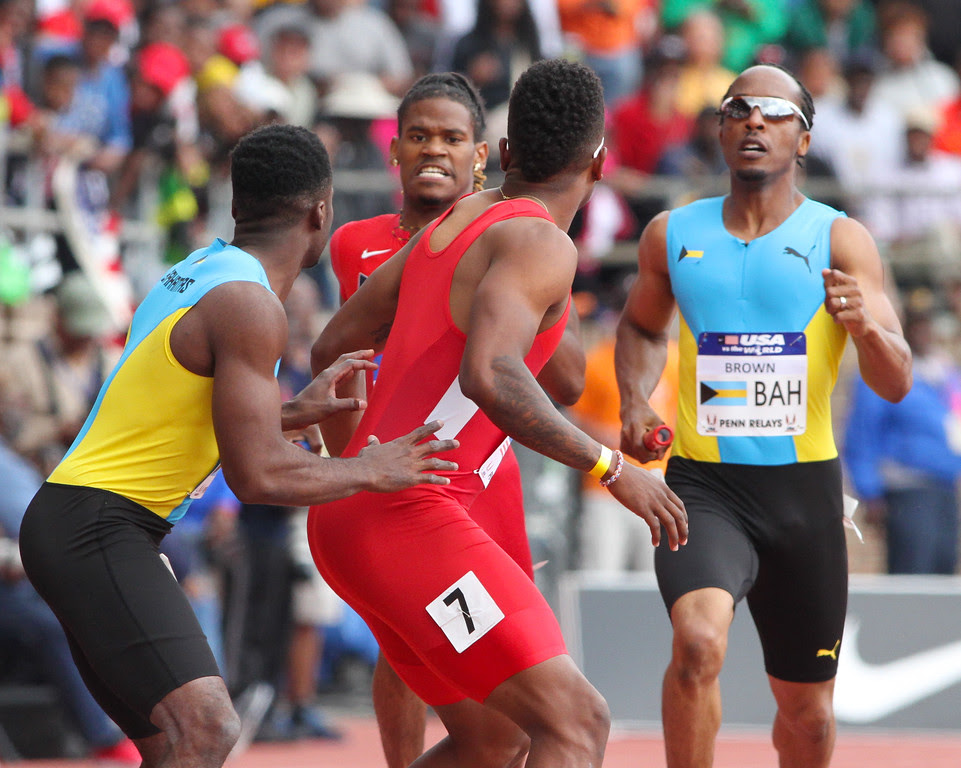 Now both teams had to cross to make their passes.  Looking for an advantage, American Manteo Mitchell tried for the 4x100M style no-look pass.  Two time 4x400M Olympic medalist Ramon Miller opted for the more secure 4x400M style look-back pass, which in this case turned out to be the difference in the race. 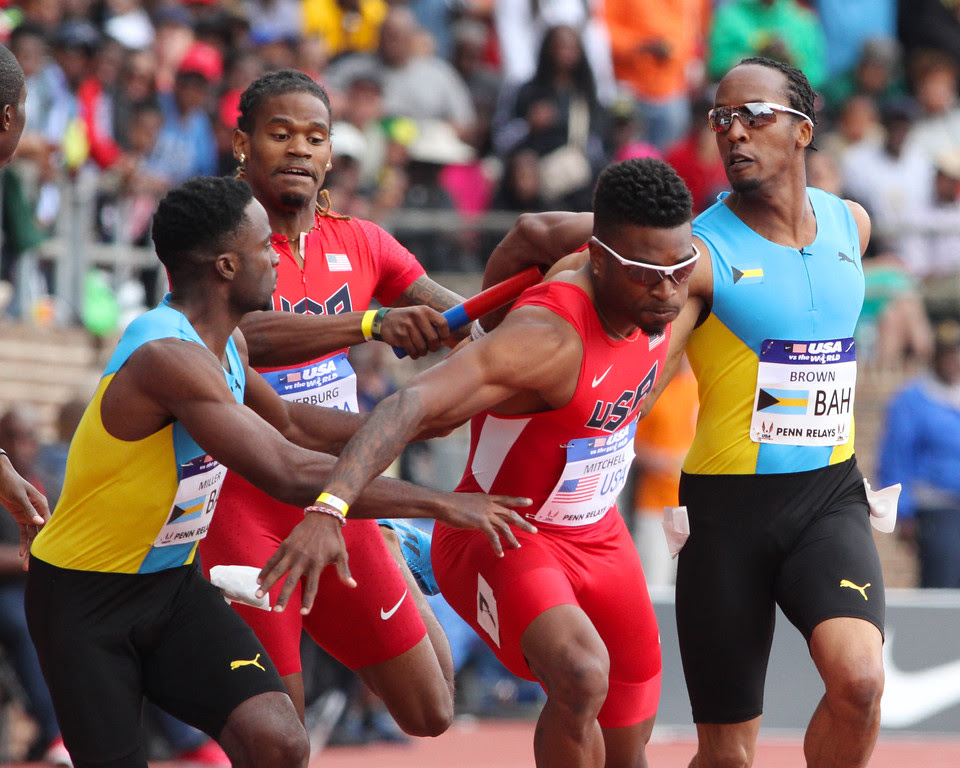 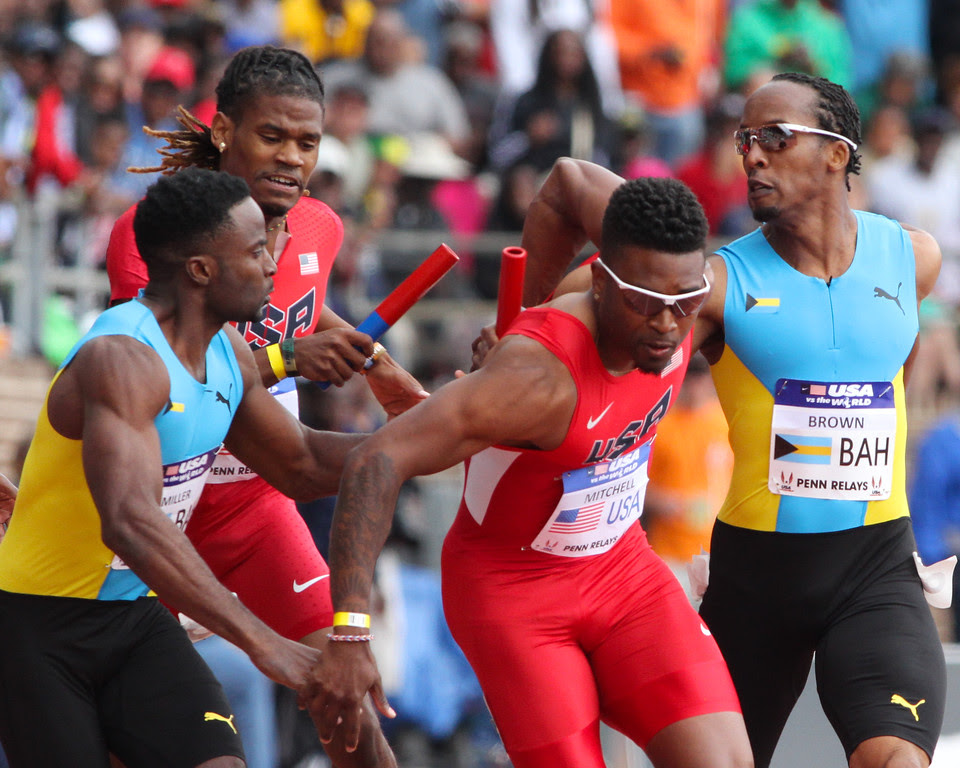 At one point, there were three hands on one baton!  Everyone knows that just isn't right! 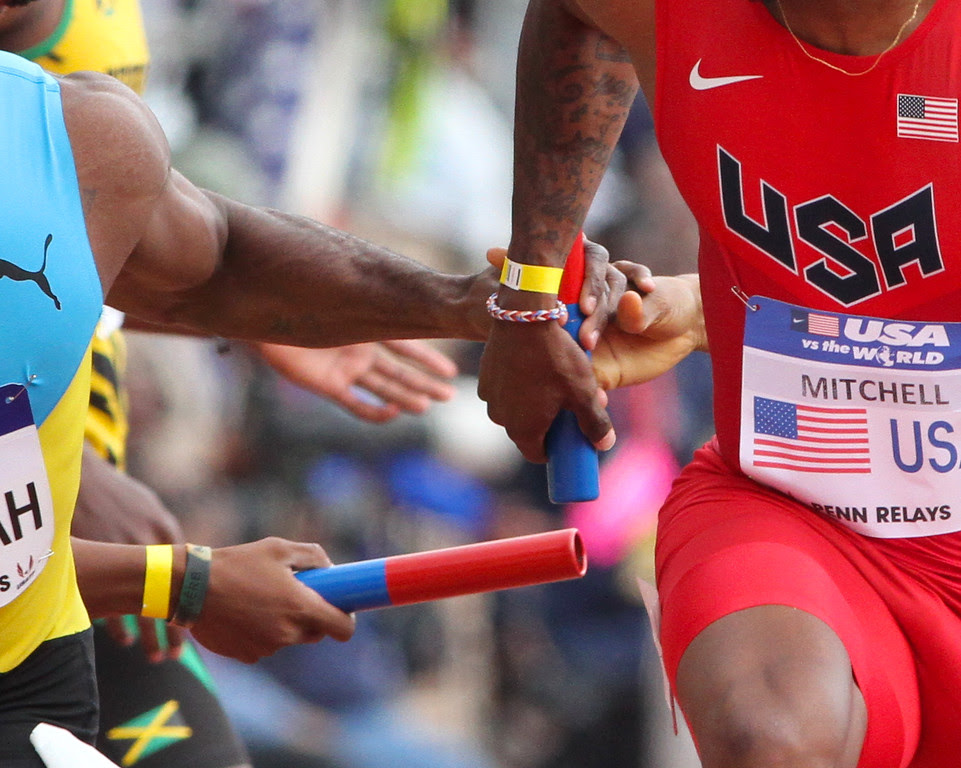 When Miller and Mitchell came out of transition, they looked down and both had a hold of one baton! Who's is it?  Verburg knows... check the look on his face... 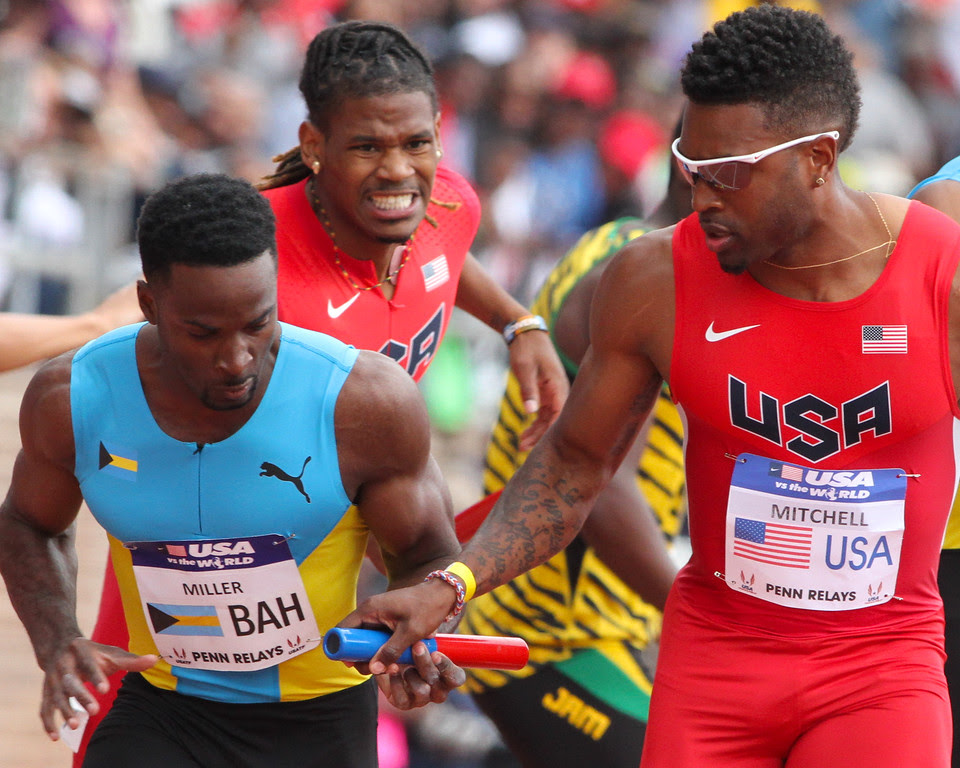 There was nothing for Mitchell to do but let go, turn around and get his team's baton while Miller hit the jets for the anchor leg. 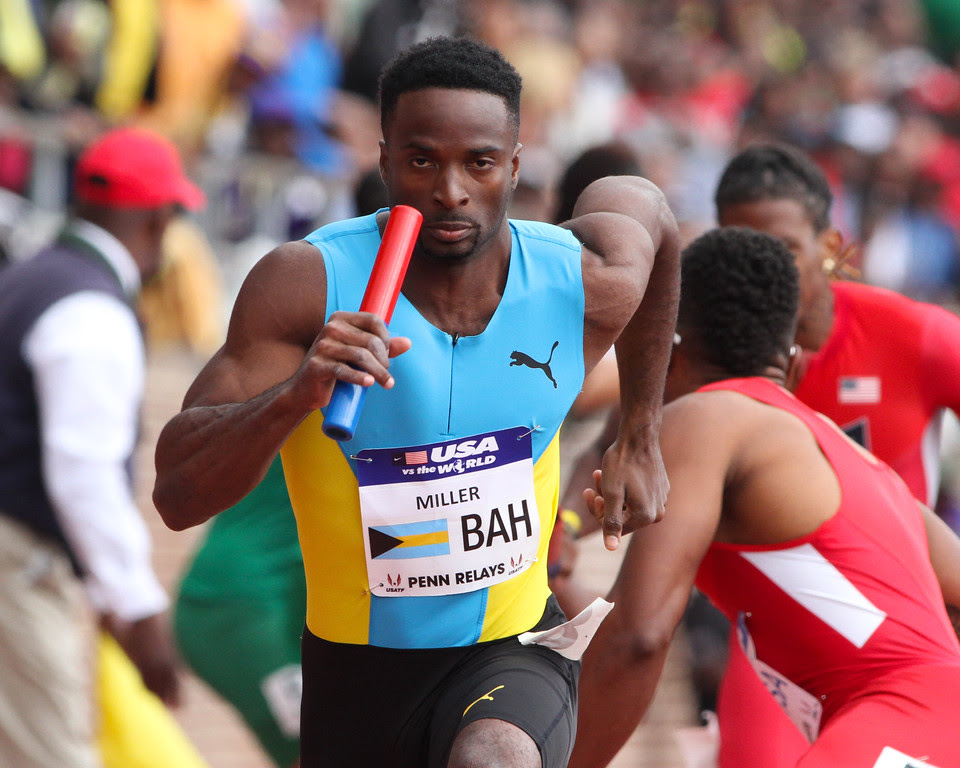 That created a gap that Mitchell simply couldn't overcome, as Miller broke the tape for the Bahamians. 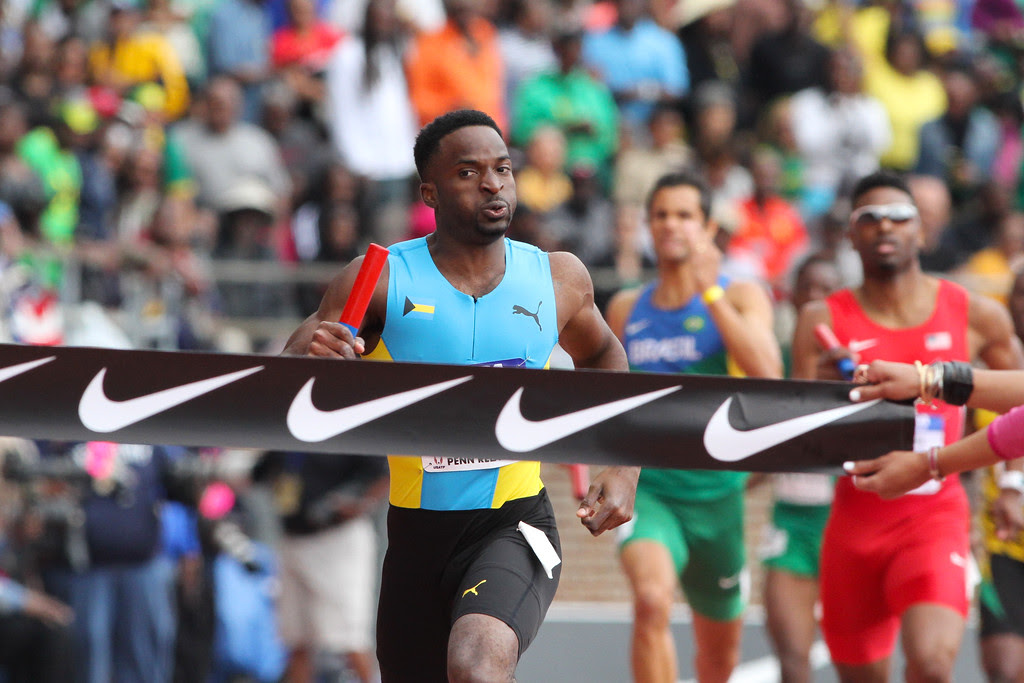 What a wild 4x400!  The next two years should be interesting to watch in the run-up to the 2016 Olympics.  Will the Bahamian team stay together and repeat a Gold in 2016?  That would be an extraordinary accomplishment.  Congrats Bahamas.  Condolences USA.  That's just the way the cookie crumbles (or the baton passes) sometimes.

See much more at wlpearce.com where it's all about the photos!  Enjoy!