The Noles and Gators held their traditional end of season rivalry this Thanksgiving weekend... Basketball Friday night and the Football game Saturday afternoon.  I was privileged and excited to shoot them both.

The basketball game Friday night in the O'Dome was just about as exciting as it gets.  The arena was packed full and the atmosphere was electric.  The Rowdy Reptiles were about as rowdy as I've seen them in a good while. 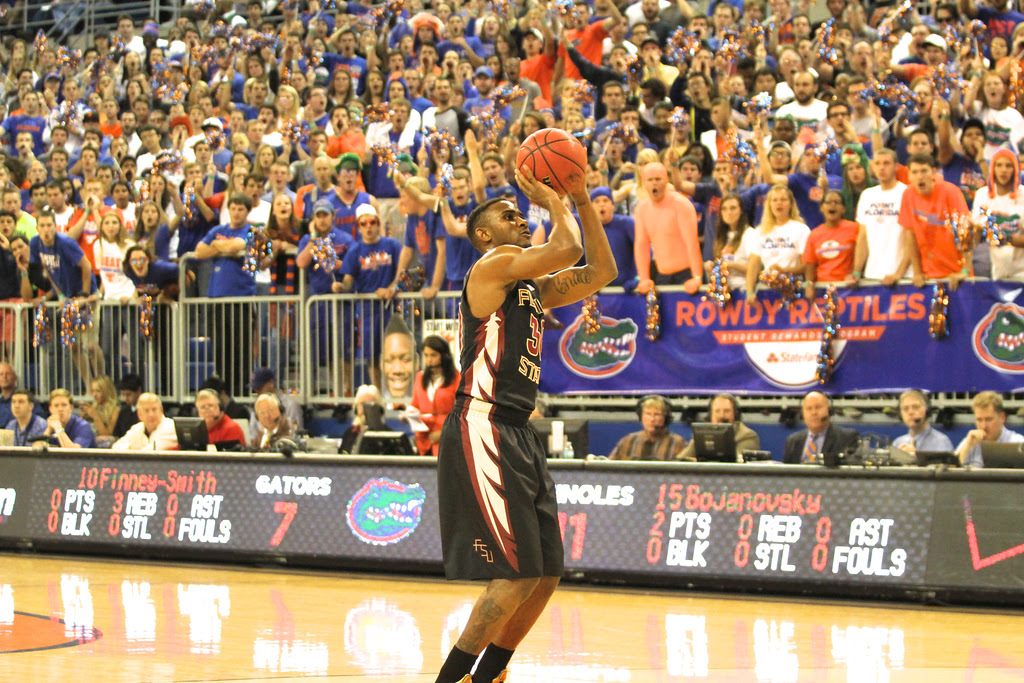 The players and coaches were wound up pretty tight too.  Billy seemed to get a little frustrated that the Gators couldn't pull away from the Seminoles at any point during the game.  Of course, he vented on the hapless Referees.  Here's a new nomination for Fat Head sticker... 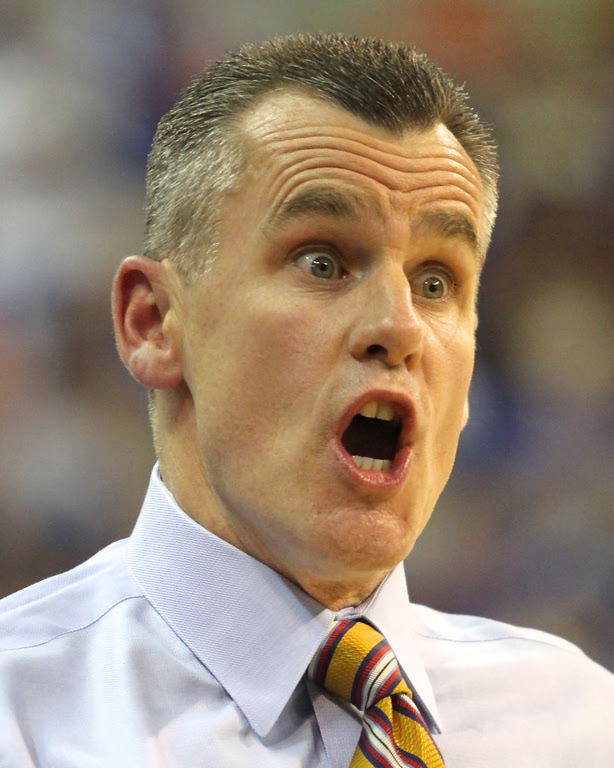 The Seminole's defense was locked in all night.  Florida never could quite put it away.  Plays like this block by Okaro White kept the Noles hanging close right up until last tick of the clock. 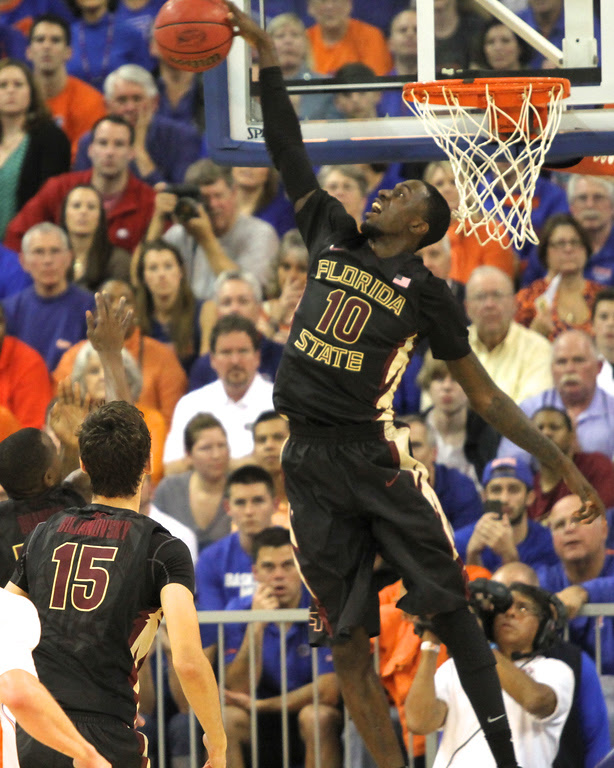 FSU played UF tight the whole game, and with a couple of minutes left in the game were down as much as eight points.  FSU made a run and tied it up with thirty seconds left on the clock.  UF had what appeared to be the last possession, delaying to run the clock down before taking the final shot.  They drove to the basket and missed the shot, but drew the ticky tack foul and made both shots.  With 1.2 seconds left on the clock, FSU inbounded to half court and threw up a desperation shot.  I was right under the basket and the shot doinked off the back of the rim... literally an inch from going in and winning the game for FSU.  The O'Dome erupted!

After the buzzer sounded, the Gator players were walking around shell shocked.  This look from Patric Young was representative... 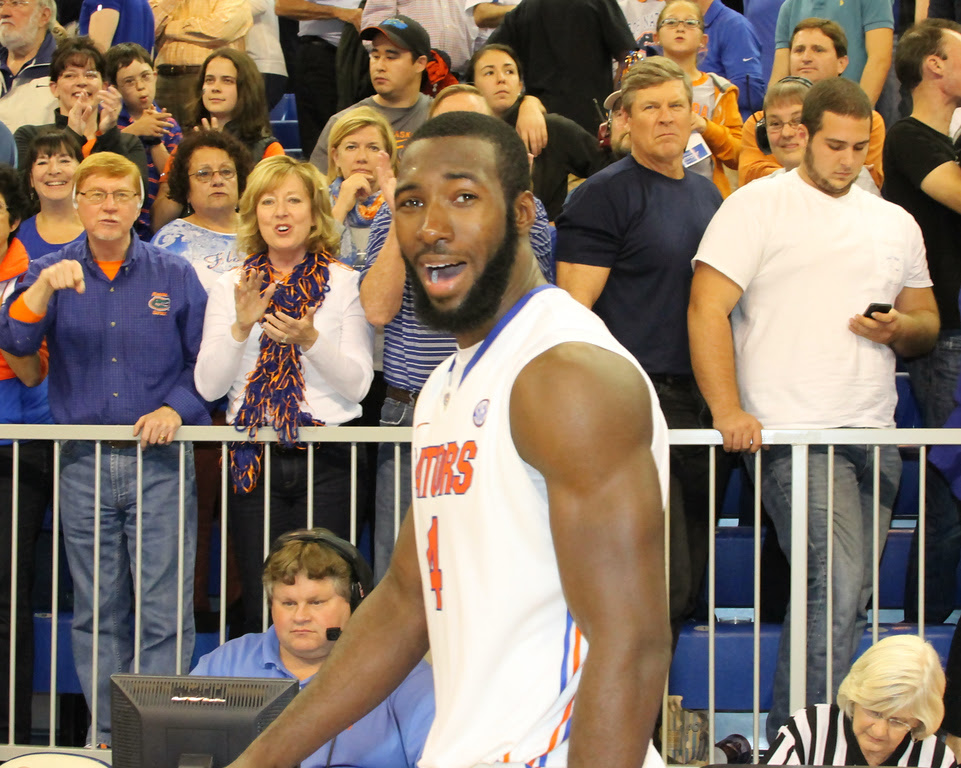 The football game Saturday wasn't quite the nail-biter as the basketball game, but exciting none the less.  Florida Field holds special memories for me.  As a young teenager, I attended the Ray Graves sports camp every summer and played under the wooden bleachers (ouch... dating myself) in the south endzone during the Gator games in the fall.  That was in the era of John Reaves and Carlos Alvarez.  Imagine my surprise when Carlos Alvarez was announced as the honorary Mr. 2-Bits for the game. 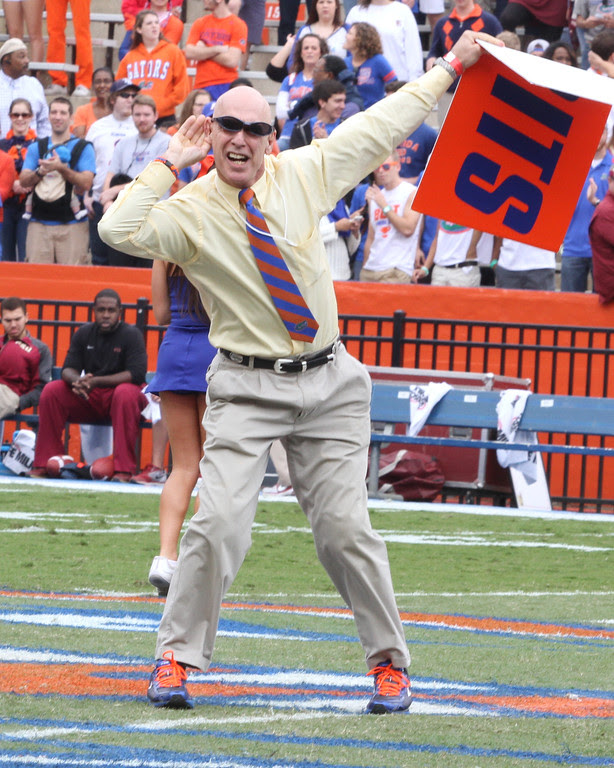 After his bit (pun intended) on the field, I ran over, shook his hand and thanked him for the special memories.

The first quarter and a half unfolded like no one had expected.  The Gators actually played, and played well!  The Noles had some miscues... Winston not quite on his game.  The passes weren't quite hitting the mark.  Perhaps off-field concerns hadn't been purged by the excitement of the game yet. 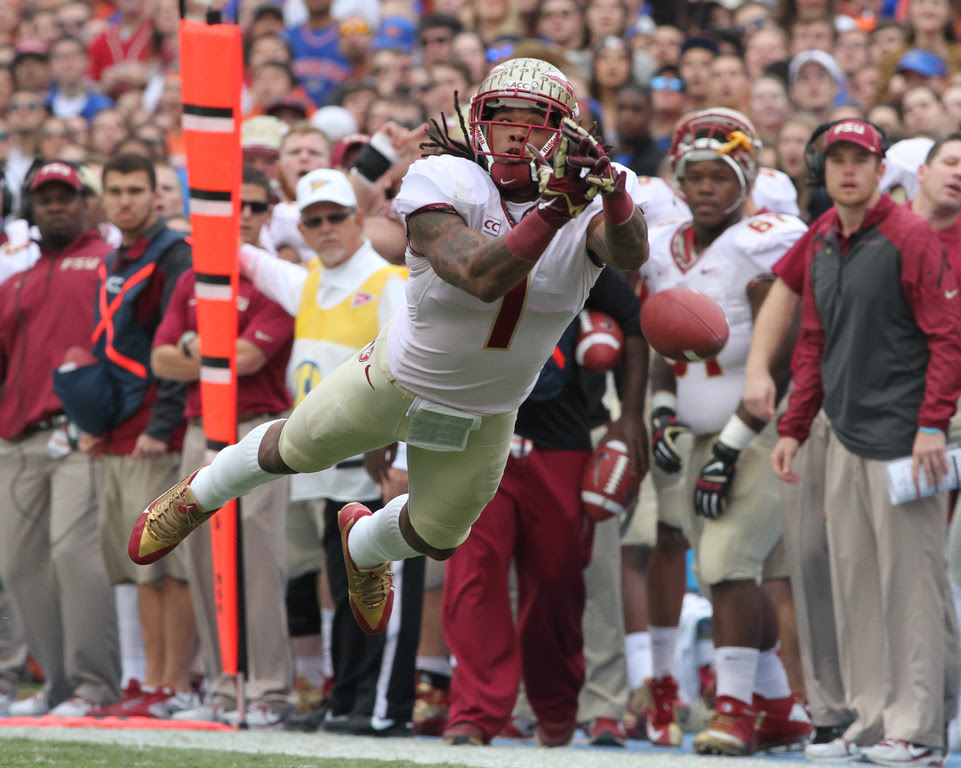 I think the Noles were getting worried until the Winston/Benjamin express shifted into third gear on this play, on the way to overdrive for the day.  You have to enjoy the smile on Kelvin's face as he crosses the goal line with a grimacing Brian Poole in tow. 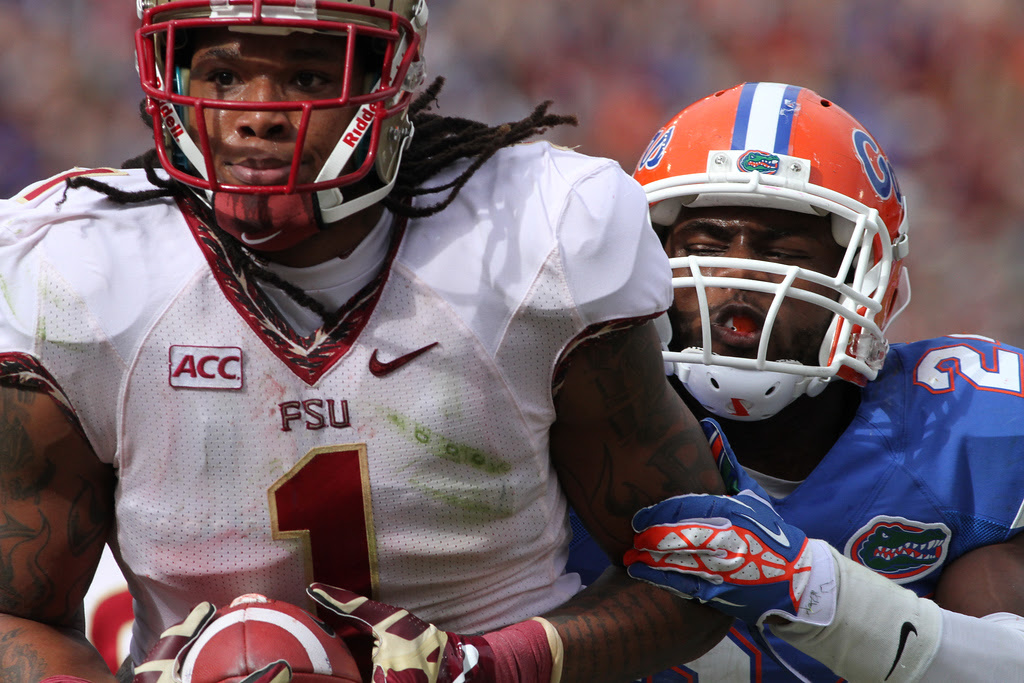 The Noles defense was just as stifling as it has been all season long, almost shutting the injury depleted Gators out, forcing turnovers with nasty hits like this one on third string Mornhinweg.  No one can blame a quarterback for not holding on to the ball through something like that! 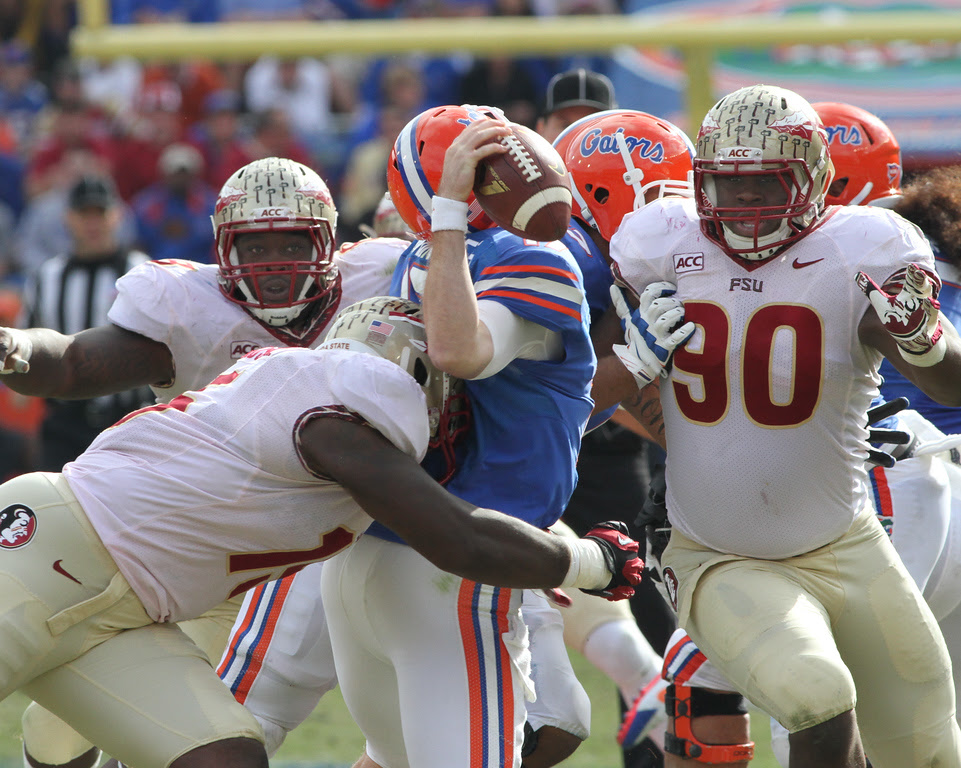 After his stumbles in the first quarter, Jameis Winston was his usual spot-on self, even scrambling a few times for positive yardage when forced out of the pocket.  There's a good reason he has the highest QBR in the country after the last game of the regular season. 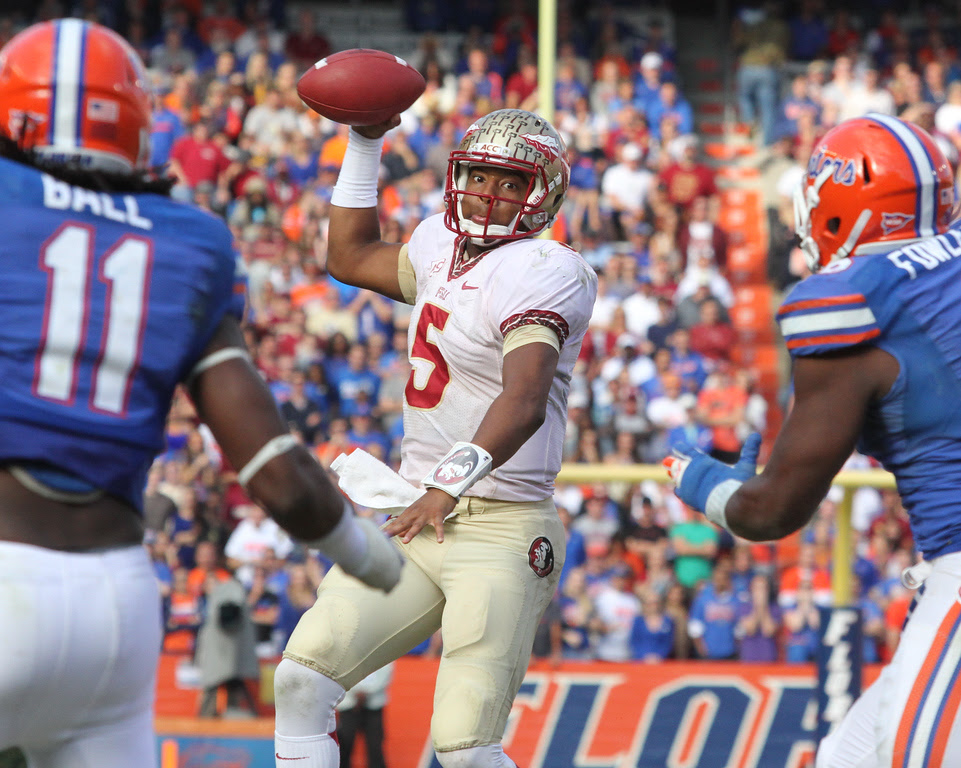 Even though it was a hard-fought, bitter rivalry game, I always like seeing displays of sportsmanship after the game.  I'm glad to see that some remember that football is a "game" to be "played"!  Thanks for letting us join the fun guys! 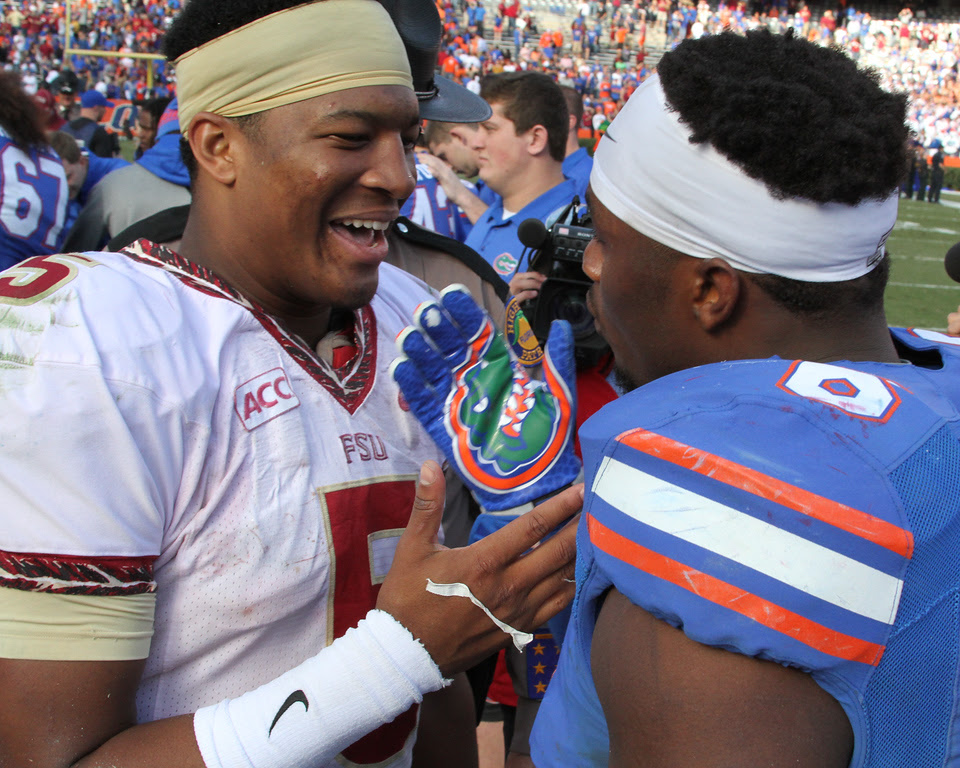 And of course, see much much more of everything at wlpearce.com, where it's all about the photos.